I wanted to know what my Roomba was up to without going through official channels.

This is a part two in the series of setting up checkmk monitoring for all the IoT devices on my network.

Now that I had checkmk setup, I would have to answer two questions:

It’s sometimes fun to walk through the unnecessarily convoluted path you take to find the answer to something online.

When I initially wanted to look at what tools were available for Roomba hacking, I started by looking at Hackaday. Their posts are well tagged, and had a few articles for Roombas https://hackaday.com/tag/roomba/. The one that caught my eye was a project where someone turned the mapping output of the Roomba into levels for the original Doom video game http://www.richwhitehouse.com/index.php?postid=72.

Looking at the code for this project it had some Python scripts to interact with the Roomba API, but they were pretty tightly coupled the GUI logic for this particular tool. However, the comments mentioned the logic coming from this GitHub project https://github.com/koalazak/dorita980.

The dorita980 project is a sensible and seamingly well maintained project that was exactly what I was looking for. It gave a clean API for talking to a Roomba on your LAN and it also has some of the cloud API as well. It was a Javascript Node project though, so I said “No(de) thanks” so I merged what I learned looking at dorita980 and the Doomba scripts to make my own utility:

There’s 3 interfaces implemented for that script:

My Roomba is a more basic model that doesn’t do the localization used in the Doomba project, but it gives some values that are worth tracking like it’s WiFi signal strength and its battery percentage.

This took a lot more trial and error then it should have for two main reasons. First a lot of the documentation is not up to date with the 2.0 release, so there was a lot of slightly wrong information out there. This is compounded since the only documentation I found that covered the exact thing I was trying to do was even more out of date.

The other issue is that checkmk is extremely customizable and extensible, so it took awhile to figure out how to bolt on the functionality I was trying to achieve.

This article also describes how there are four kinds of agents that can invoke a check:

This gave a lot of combinations for how I might write a plugin.

My initial thought was that the Special agent seemed like the best fit for my use case, but there didn’t seem to be any documentation on how to write a plugin that would run like this. I guess I could look at the source of the existing special agents, but I kept looking for a simpler solution.

My next thought was to look at writing an Active check since it’s the other type of check that doesn’t need to run on the host its monitoring. However, I found that nagios plugins are extremely limited. You can only report an enum of whether the service was OK and weren’t able to plot values over time.

Finally, I read over the page on writing Local checks. These don’t really make sense from an organizational perspective because they run on a host you installed an agent onto. However, they give a very simple, very flexible way to pipe values and thresholds into checkmk.

Basically, you can make the agent run an arbitrary script as part of it’s update. The script returns a string over stdout that is interpreted as a series of metrics and warn/error thresholds.

There are a few limitations:

Despite these limitations I was able to achieve my goal of being able to monitor if my Roomba was at a critical battery level, or having WiFi issues: 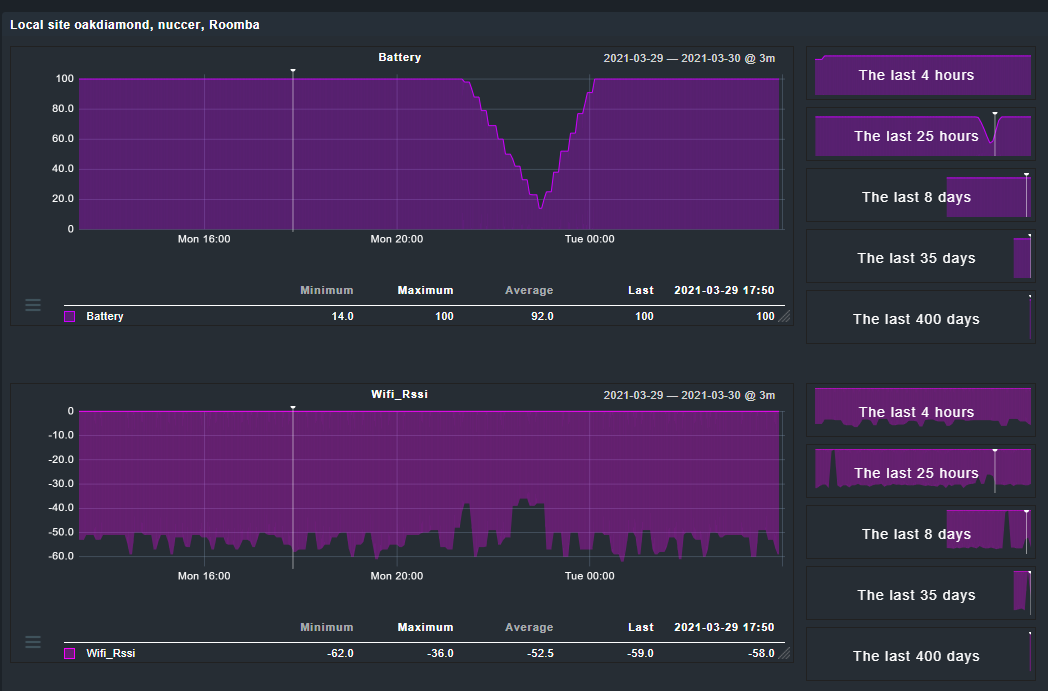 See Reolink Python API with checkmk for the next device I added.